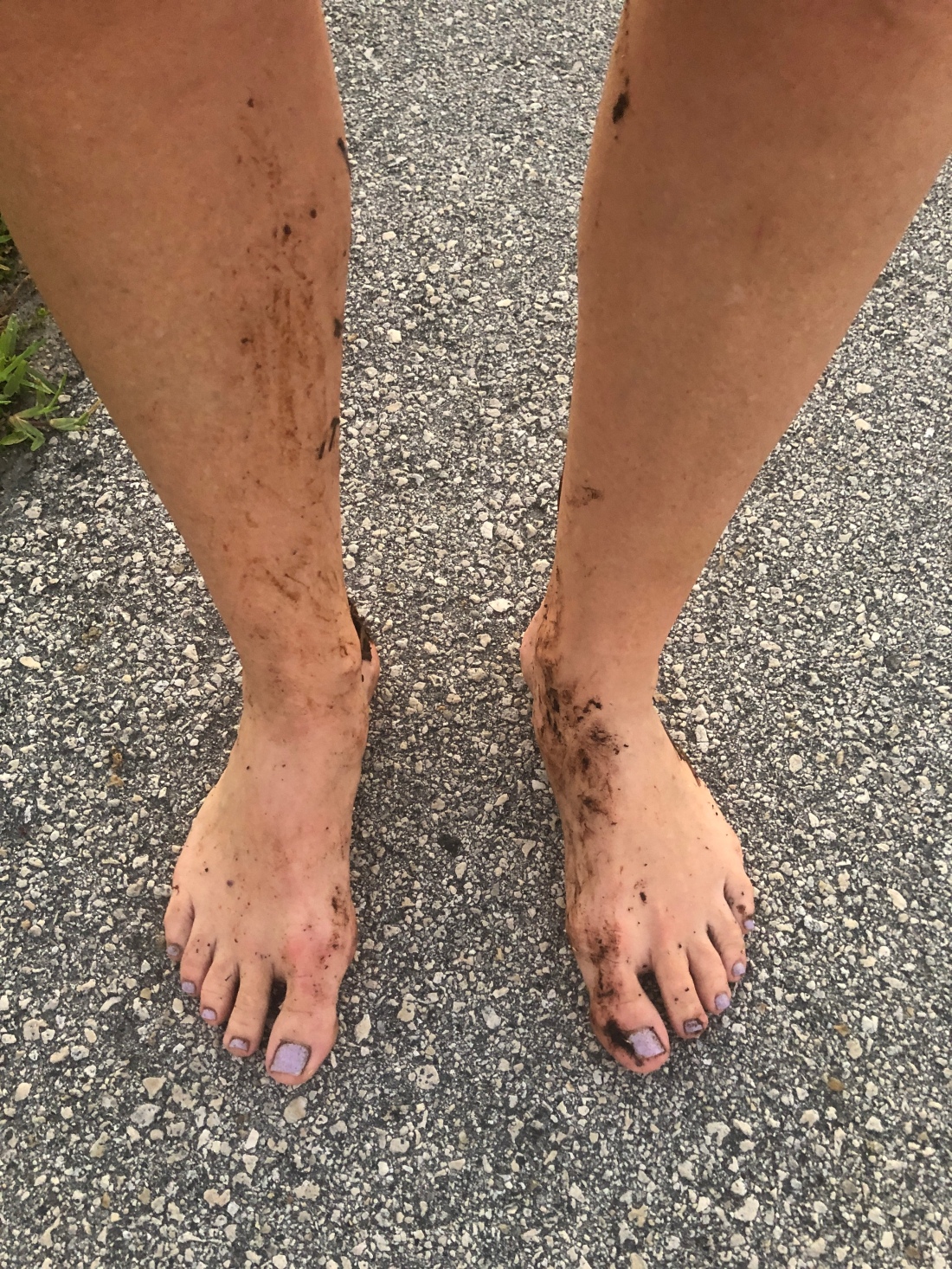 A friend suggested I should blog more about the humorous aspects of my journey and the growing pains I’ve experienced. And since I started my day by losing my shoes in something similar to marshy quicksand while trying to get to the bay to watch the sunrise, inspiration hit. And since in true Stephanie fashion I didn’t beat a hasty retreat when my first foot sunk, and I decided to keep trying to walk, I’m now short a pair of flip flops. But you can buy those anywhere down here in the Keys, so life is good.

There’s been no shortness of klutziness. A small, one room space with 3 good sized dogs is hard enough, but throw me in the mix and…let’s just say there should be an award for klutz of the year and I would win it. Things like this…get up in the middle of the night to go to the bathroom and don’t turn on a light because those are on the ceiling and it’s hard. Raise the toilet lid (and the seat comes up too), sit completely in the toilet bowl, jump back up and slam forehead into the door frame in front of you because the space is so small.

I’ve banged my head on the outdoor awning twice because I forget it’s there. (Friend who suggested this blog, and my sister have both said I need a helmet, so you can hold your jokes.) I have a scrape under my chin from smacking myself trying to collapse my foldable bicycle. Add an injured big toe on my left foot from tripping over a curb walking my dogs to the kennel area in the dark at 5:30am, a bruise on my right knee from the fancy new hitch on my car, bruise and burn on my left shin from when Sassy pulled on (and escaped from) the lead that was attached to the picnic table where I was sitting, and a bruise of an unknown origin on my left bicep.

I learned the hard way to bungee the cabinets shut during towing because when we parked at one location I had 100 K-cups and about as many plastic forks and other food stuffs all over the camper. I nearly got blown off the bridge riding my bike across it get to the beach (because I thought that would be easier), and worked harder than I’ve ever had to work to keep the wake from pulling me and my SUP through the drawbridge waterway. When I got to my latest destination I had a water connection problem and had water all in the camper floor to clean up, and a connection to fix. (I’m becoming quite the handyman. Could probably hire myself out.) I sleep on the twin sized convertible banquet because the dogs have taken over the queen sized bed.

And I am super content and am learning to breathe. And I still got to see my sunrise over the RV park. 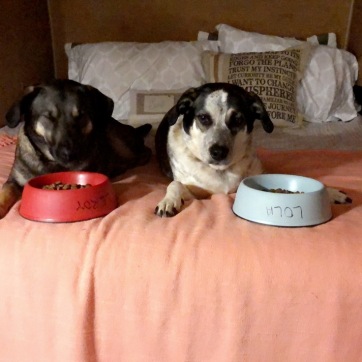 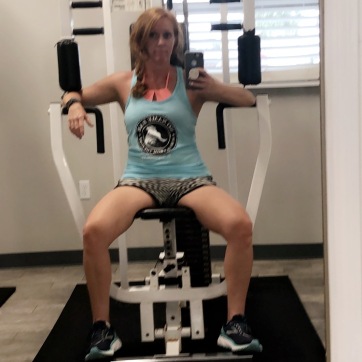 We’ve been on the road for a week and the best way to describe it so far is “you live and learn”. We pulled in to Dothan, AL the first evening, 2 hours behind schedule. I got away from home later than intended and then Lola took a poop in the back of the Explorer about 80 miles down the road. Poor girls nerves were shot. So when I got to Dothan it was dark and I had never fully “set up camp” before. It was cool enough, and there was a really nice bathroom on site so I thought I would just hook up to power and then deal with water in the morning, since it was also raining . Well, the lights worked but the microwave and the outlets wouldn’t. I could do without the microwave but not without my coffee. I just knew the RV service department had done something when they had it this past week and I was going to have to call them the next morning. I’ll be honest and say I sat on the floor and had a minor meltdown and considered just turning around and heading home. There’s coffee there. But about 2 hours later I decided to try again and started checking things out. The breakers in the power box where we plug in were turned off. Something as simple as that nearly sent me packing. Now, that’s the first thing I check at each site.

The next morning started super early with the dogs needing to go out. In the rain. Again. I went ankle deep in a puddle of water that I couldn’t see at 5:40 AM. I went through 3 pair of socks in the first 12 hours of this experience. Second lesson learned, pack A LOT of socks when you’re living the RV life. I also didn’t turn the heat on before I went to bed and it was 42 outside when we woke up. Another lesson, always check the weather. And Lola has never gone to the bathroom on a leash, and I had 7100 steps by 8:00 AM just trying to get her to go. I learned super quick to search out dog parks in the areas near where we set up. Dog parks have been a life saver. The dogs get worn out quickly and you meet people who are always willing to talk to you and help you out. One person told me about an app called #BringFido. I immediately downloaded it and now I can easily find dog friendly places nearby. Also, notice the first photo. Leroy and Lola are total divas and have decided they will only eat while LAYING on the bed. Lola even goes so far as to have me put piles on the bed and not in the bowl. Not sure what it says about me that I put up with it, but until she gets more used to gypsy life, you do what you gotta do.

More learning experiences the second day. I broke a plastic piece that locks the water valve cover on the outside of the camper. There was a RV store right next to the RV site (very smart of them to build there) and they had the part I needed. Granted they tried to talk me in to trading my camper in and just buying a new camper from them, but I was able to fix it myself and I also fixed the clothes rod in the front closet that had broken because I put too many jackets on it. Watch out DIY channel, I’m coming for ya. (I also brought way too many clothes, but that’s another story. )

We left Dothan and headed to Ocala, FL. Most of you know that I inadvertently booked a 55+ RV park for my nights there but the people were amazing. And I’m glad I did because it was right behind an auto mechanic place and the AC compressor went out in my car. Thank goodness for extended warranties and for my folding bicycle. I used the bike to get around while the car was being fixed, and the warranty saved my $600. Since I’ve had 3 problems with this car in less than 6 months, I’m going to be looking for something else when I’m back in Birmingham. Y’all keep your eyes open for something for me. Maybe a diesel because gas mileage sucks when towing a camper.

My third stop was St. Augustine. I backtracked a little, but I really wanted to visit. The RV park was amazing with a lot of longterm people there. And thank goodness everyone at these sites is super helpful because this was my first back-in parking spot. And they pack these lots together like sardines. A man from New York walked over and offered to be my eyes. And thank goodness for that or I might still be trying to park. Helpful people. Friendly people. People with dogs. The old person with dog thing came in super handy when Sassy broke out of her collar and ran after one of them. But instead of playing her usual game of catch me if you can, she just ran right up to an old man with a cane and leaned against his leg for some loving. caught her quickly. Getting my heart rate back down to normal took longer. There are so many dogs in RV parks. It’s good for them because it gets them exercise and companionship, and it also gets them out being social. It’s serving to further my belief that I need to do something with animals and older people. I’m going to think on that one. This particular park also had a “fitness center”. So while I was doing my laundry I went old school and got in a little workout on some machines.

Before I left St. Augustine I met Erica. She has a Retro camper like mine, and is also traveling solo with 1 dog and 2 cats. She initially set out to travel for 2 months after she lost her job, and has now been doing it for 8. She’s also headed to the Keys and we exchanged contact information. People overall are super nice and good, if you only approach them with the thought that they are. Everyone will help if you just ask, and people will always have a conversation with you if you are willing to slow down and take the time.

Some final lessons learned in the first week: – you don’t have to lock your camper door every single time you step foot outside of it. People are good. – When living this life, you can’t keep your floors clean. No matter how hard you try. Or get your bed made up good and proper. Get over yourself Martha Stewart. It’s just dirt. – Coffee just tastes better when made in a percolator. Thanks Dad for that one. – And finally, every single pair of pants or shorts you own need to have pockets in them. Trust me on this one.